The importance of the correctly fitted clubs

How many times have you been having a great round of golf only to find you’ve left that perfect yardage for a club you hate? No matter how good a swing you make the result is always that horrible shot that then ruins the rest of your round.

Surely it’s just a mental block or a poorly made swing right?

Obviously that could be true but there’s also the possibility that the club is not correctly fitted to your swing. It may be the shafts, lofts or lies are not suited to you.

Let’s have a look at what these terms mean

Shafts:
Probably the most important part of your clubs are the shafts, it needs to match with your swing dynamics for consistent shot making.

You can go into so much detail here besides flex, kick point and weight are just a couple more that spring to mind but these are best discussed in person.

Loft:
“Loft angle” – which most golfers shorten to just “loft” – is an important measurement (in degrees) 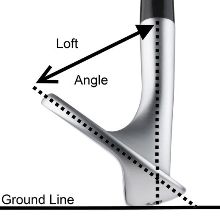 applied to the club heads of all golf clubs. Technically, loft angle is the angle formed by a line that runs down the center of shaft and a line running down the face of the club.

This year I’ve seen some top highly rated manufactures clubs that do not have consistent fitting within the set. Today’s modern brands allow a tolerance of 2° on there loft and lies, the average golfer needs a 3° difference between each club, so imagine buying a set that has a 7iron with a loft 2° weak and an 8iron that has a loft of 2° strong, effectively they have the same loft and the only difference is the length. (This has actually happened to me on a set of irons I purchased)

Lies:
The “lie angle” of any golf club is the angle formed 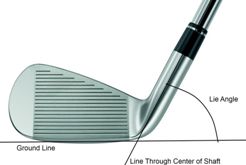 between the center of the shaft and the sole, or ground line, of the club when the club is soled in its proper playing position (as at address). Picture the club properly soled on flat ground, with a straight line extending back from the heel of the club along the ground. Now imagine measuring the angle from that line up to the shaft. That’s the lie angle. 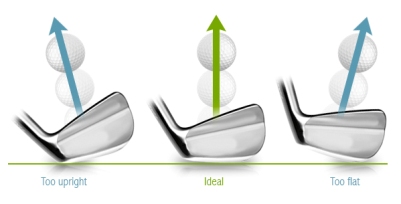 To put it simply, lie angles are an important part of your clubs. Imagine playing a match and having to hole putts that are 20 feet further away purely because of ill fitting lies?

At the end of the day club heads are just a lump of metal that when hitting them regularly in to the ground, especially if you practise a lot, they will bend. As I said earlier even brand new clubs can come with badly adjusted loft or lies so the best thing to do is get them checked and adjusted, make this a regular habit and at least you know for sure its not the clubs fault if you miss-hit a shot.

As always thanks for all your support