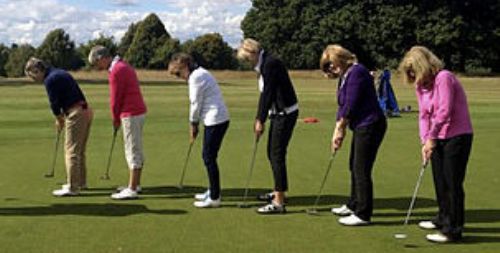 Ladies Group Coaching – Learn how to chip, putt, pitch and play bunkers the easy way in a very social and friendly environment – booking will be required so look out for the posters in the ladies locker room.

We’ve had several golfers in the shop recently asking about how you play this game or that game so I thought it best to go over the basic formats for the most popular games played in the UK.

The two basic forms of playing golf are Match play and Stroke play. Apart from these two basic types of play, many other golf tournament formats exist, some of which are regarded “official” forms of play, such as Stableford and the popular forms of team play known as,Foursome and Four ball games.

Match play:
In match play, two players (or two teams) play every hole as a separate contest against each other. The party with the lower score wins that hole, regardless of how many shots he won the hole by. If the scores of both players or teams are equal the hole is “halved” (drawn). The game is won by that party that wins more holes than the other. Matchplay is a very popular form of competition at club level.

Foursome:
A foursome is played between two players in partnership, playing one ball which they hit alternately. One player tees off on the odd numbered holes, the other on the even holes, regardless of who played the last putt on the first hole. The other shots are played in turns until the hole is finished. Penalty shots do not affect the order of play. Foursomes can be played under match play or stroke play rules.

Four ball:
The same as foursomes but each player plays with his own ball and the better score of the team counts. Four-balls can be played as match play or stroke play.

Texas Scramble:
Each player in a team (of two, three or four players) tees off on each hole and the players decide which shot was best. Other players then picks up their ball and play their second shot from that position and the procedure is repeated until the hole is finished. The lifted balls must be placed within 6 inches of the selected position but not nearer the hole. If on the green, the balls are to be placed within one putter head of the marker. This type of competition is popular with golf societies.

There are lots of other variants of these games played around the world and a great time had by those playing them. I hope this gives you all a insight into playing certain games but as always we are happy to explain in more detail in the shop.

Happy golfing and I look forward to seeing you at the club soon.