I first sent this tip out some 3 years ago but with lots of new clients and golfers having bad habits I thought it best to send it again.

Recently I’ve taken a few of my students out on the course, its something I think is very important for a coach to do as it lets them see the student in real time action, we can see every aspect of your game and make decisions based on that.

What I find amazing is how many of them are not aiming at the target, of all the things you do before you play a golf shot setting your alignment is probably the most important.

This requires a lot of attention and is something 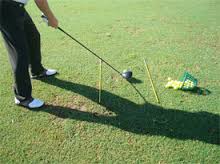 you should all practise, that’s right practise to the point of it just becoming natural. For the majority of the shots you play, your grip, posture, and overall stance will fall into place. Once you’ve mastered these things, you don’t really have to concentrate on them. But for each and every shot you play you will have a different target requiring careful and precise aim. Good alignment takes work.

On a tee shot, an error in alignment of five degrees can usually mean a ball in the rough rather than the fairway. Unfortunately, many players fail to realize this. They may think about alignment once or twice during a round, but more often they simply swagger into position and swing.

Consider what can happen when you’re inattentive to your alignment. Remember, you’re trying to hit a 1.68-inch diameter ball a distance of several hundred yards into a 4.25-inch diameter hole, with a clubface moving at a speed of anything up to 90+ miles an hour. On a tee-shot of say 150yds, an error in alignment of five degrees will result in approximately 15yds off target?

Alignment is my No. 1 priority when I begin to play a golf shot. And because accurate alignment is a demanding and sometimes elusive quality, I try to simplify the aiming process as much as possible. I focus everything on my clubface.

Once I’ve decided upon the type of shot I want to play, the first move I make is to set my club position behind the ball, so that it’s facing squarely at the target. My target will be something around 9-18 inches in front of the ball and inline with where I want to aim; this is far easier than aiming at something 200+ yards away. Holding the club in my right hand only, I approach the ball from behind, sighting up and down that imaginary line that extends from the ball to my target. I then assume my stance, half facing the target, still tracking that line from the target to the ball. At this point, I set my club down behind the ball and swivel the clubface minutely back and forth until it’s in exact position, facing dead at the target. Only after this is set do I proceed with the other elements of the grip and address.

I think this clubface method keeps alignment simple. After all, it’s far easier to orient yourself to something right next to you than to try to aim at something two or three hundred yards away.

Another way I keep things simple is to play virtually all of my shots from a square stance. Once I have my clubface aligned squarely to the target, I simply set my body so that my feet, knees, hips, and shoulders all align exactly parallel to that imaginary line that extends from my clubface to the target. Note that I do not align my body at the target because of the fact that I am standing to the side of the ball. I must therefore aim at a point just inside the target. This is why I align my body parallel to that clubface-to-target line.

The old image of the railroad tracks is a good one, where the

outside track is the clubface-to-target line, and the inside track is the line along which you align your body. Combine this square alignment with a square grip, and you’ll make life easy for yourself. You’ll eliminate a slew of bad tendencies while giving yourself the best chance of hitting the ball consistently solid and straight.

It’s a good idea to have a friend or, better yet, a PGA professional check your alignment from time to time. Often your stance can look and feel square to you but your hips and shoulders will be several degrees off line. Traditional instruction suggests you set a club/training rod down along your toe line to check alignment; I also prefer another one just outside the ball but make sure both clubs/rods are parallel / square to you target line.

One thing to be careful of is practise at ranges, these tend to have square bays with square mats and its very easy to stand squarely in these, you never get this situation on a golf course so whenever it’s possible, that’s the best place to practise.

Good luck with this tip!