The Summer Season has Started

19th Hole chat about the golfers image and using that golf trolley / caddie / buggy or just carrying those clubs?

There has been plenty of talk in the 19th hole of many golf clubs about the “Macho” golfer who refuses to use any form of golf trolley, golf buggy or even a caddie during a round of golf claiming “I like to keep fit” … but have you ever wondered, just how much help could a trolley be to you?

What about fitness, how many calories do you burn whilst walking or would you play better if you were in better shape?

Well let’s see if we can answer some of those questions, a gentleman called Neil Wolkodoff, the director of the Centre for Health and Sport Science at the Rose Medical Centre in Denver, decided he wanted to know some answers and invested in $27,000 worth of equipment to conduct a set of tests on amateur golfers. When he was done, he had some findings that could settle a lot of those 19th hole arguments.

One surprising result was golfers scored lower while walking with a caddie or with their clubs on a push cart than they did when using a motorized cart. And even more surprising was golfers carrying a golf bag posted the highest average score. 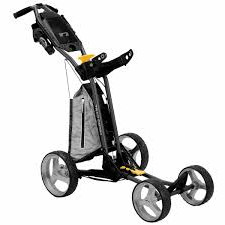 Each of the golfers went through rigorous testing before the study to establish their aerobic endurance and anaerobic threshold levels — the point when lactic acid build-up generally begins to impair co-ordination and concentration. This became important because Wolkodoff could watch readouts from six pounds of sensors strapped to the golfers and identify when they had gone beyond their fitness level.

Another thing the study discovered was that exceeding one’s anaerobic threshold usually went hand in hand with ineffective golf. Think, for example, of someone walking up a steep hill and then having to execute a delicate chip without the two-minute recovery period needed to restore heart and respiratory rates to normal.

So being fit cuts strokes?

If you’re out of shape, exceeding your threshold could happen a few 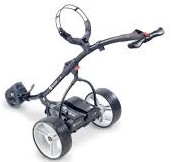 times every round, even while riding in a cart and your golf game will suffer. Somebody with the yips might just be a little winded after walking up to the green. At the same time, being in better physical condition would make you better mechanically and mentally.

There were only 8 golfers in the test group with ages ranging from 26-62 and handicaps from 2-17. Each played the front nine at a championship-quality Denver-area course four times on different days — walking with a push cart, walking with a caddie, walking and carrying their golf bag, and riding in a golf cart.

Weather conditions were similar each day. The golfers were required, as much as was possible, to approach the nine holes the same way each time. In other words, if they had hit driver off the first tee in their first round, they had to hit driver again on the first hole of their final three rounds. The sequencing of how they played the rounds was varied; not everyone played with a golf cart first, then with a caddie and so on. 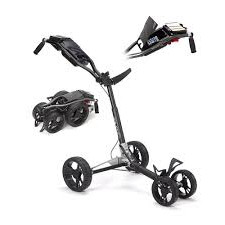 The golfers’ results during the four rounds tracked similarly with consistent statistical trends. For example, seven of the eight golfers reported the same scoring pattern: lowest while playing with a pushcart, followed by playing with a caddie, next playing in a motor cart and last was playing while carrying their bag.

“It’s not a perfect study, but I think we discovered some things,” Wolkodoff said. “You throw the findings out there and let people take their pot shots at them, which is fine. I would like to see someone do a follow-up study. But if it hasn’t been done before, it’s because of all the time, equipment and data involved.”

This is just a snippet from the full report but should you want to know more then please see me in the shop and I will give you the link. Content courtesy of onparblogs

Interestingly the Junior Golf tour actively encourages all the players to use a golf trolley for every event and highly recommend an electric trolley. Young Professional golfers playing the lower tier golf circuits are also encouraged to use either a caddie or an electric trolley and not carry their own clubs. Check out the Europro tour on Sky Sports and see how many players are using golf carts.

So in my opinion if you want to get more out of your golf then start using as much help as you can get and using a trolley is a step forward to lower scores.

Good luck with the new season and see you all soon!