I was going to give a tip on the golf swing this month but, having just read this article in one of the golf monthly magazines, I decide to share this story instead as it’s a great topic for discussion.

The sporting world has been rocked by the Australian cricket team being caught cheating on camera. But are golf’s authorities doing enough to make sure such a story doesn’t blight our game?

What’s the equivalent of this in golf – maybe someone being caught on camera slipping a ball out of the pocket with a major on the line?

They would surely be drummed out of the sport for good and rightfully so.

“There are not many games that depend upon the honesty and integrity of the player.” Not my words, but those of the USGA in an article headlined ‘The Rules of Golf: Why They Matter’.

Sportsmanship, integrity and honesty are central to this beautiful game we all play, and sticking to the rules is at the absolute heart.

We’ve all seen it in our own clubs. The mere hint of anything untoward – did that player move their marker forward? Is that really where their ball landed? – is enough to see a player ostracised from a group and even from a club. (There is a club not far from Surbiton that caught a “Captain” cheating in a competition; he left that club very quickly!)

I’ve seen at first hand what happens when the members think a cheat is in their midst. The atmosphere becomes poisonous.

Take that into the pro game and the authorities would have to make an example, else how could you keep the grassroots in line?

Yes, we all know there is cheating at every level. There are enough whispers at the top of the game and we can all reel off a dozen or so stories of times we’ve suspected we’ve also been the victims.

But that’s the key word: suspected. What Steve Smith, Cameron Bancroft and whoever the rest of the Australian ‘leadership group’ are cooked up was blatant and replayed on mobile phone screens millions of times around the world.

The evidence was damning and indisputable.

In a similar situation, golf’s authorities would have no choice but to clamp down hard. The very essence of the game would be at stake. And I’m confident they would. 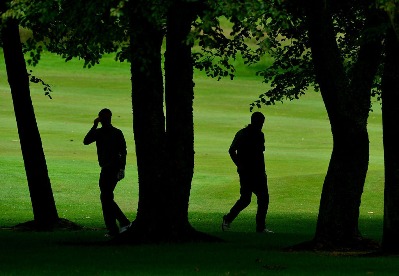 No, writes Mark Townsend
For all golf’s talk of self-policing and being holier than thou I would suspect that cheating goes on at every level and that everyone’s then too scared to get involved. There are always whispers about Tour players who roll the ball here and there and are less than expert at marking their ball – one player on Tour has the nickname Tiddlywinks – and it’s always the same names that pop up.


Multiple major winners have had issues with their own ‘self-policing’ but they’re still going strong, supposedly one player in the world’s top 20 has had a very poor past in terms of his grasp of the rules but how many have been drummed out of the game?

I can’t think of any.

And when a player has been caught out it is reported in horrific terms. Phrases such as a ‘serious breach of the rules’ pop up, there is a slap over the wrists for a few months and then he can come back to work as if nothing has happened other than everyone continuing to whisper behind his back about what a wrong ‘un he is.

I once asked a couple of European Tour caddies who the well-known cheats are and they both looked like they wanted the ground to swallow them up. They knew, the two players knew, but nobody wanted to open their mouth understandably.

For whatever reason if it happens at club level we seem to want to scream it from the rooftops.

At the club where I grew up the captain at the time (this was in the ’90s) seemed to have a hole in his trousers and his ball would appear from the bottom of them. His indiscretion appeared as a huge spread in the Sunday Times. Very odd.
courtesy NCG Magazine
Some amateur golfers “cheat” accidently.

Cheating at Club level generally arises through ignorance of, or misunderstanding the rules/etiquette. Identifying and addressing the ball in the rough, careless ball marking, taking a penalty drop (from bushes), standing on or too close to a line of putt, movement in front of the ball etc being just a few of these.

I found this topic interesting and hope you all did as well.

As always, Thanks for your support